Let's say someone in your family is accidentally killed by a drunk driver, a stray bullet, or even in a fire. In each of those incidences, there can be a person held responsible. Maybe your child was playing on the sidewalk and a driver lost control of their vehicle, jumped the curb, killing your two year old baby. Maybe your sister was coming back from cheerleading practice. While at a red light, she is shot by a stray bullet. What if  your neighbor was cooking and left the stove on while they went to the store.  This starts a fire that spread next door killing your grandparents. In each scenario, the person to blame is in your presence. Can you forgive them?

Let's even say you have been victimized. Your were a victim of sexual violence, theft, or even abuse. 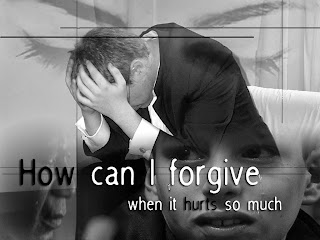 Maybe you were raped or molested by a family member or family friend. Maybe your wallet was stolen during a family gathering. How about remembering the verbal abuse from your parent, the physical abuse from your boyfriend/girlfriend or mentally abuse from a sibling?  These are the same people you see during the holidays and even break bread at the table with them on occasion. Can you forgive them?

According to Webster's dictionary, I've defined forgiveness and forgive. Here it is...

So you ask while reading this... Why should we forgive? The fact of the matter is, forgiveness is important. If you refuse to forgive someone, it would literally become a trap of bitterness.  Now if you don't forgive someone, what happens when you see that person again? Do you think about what happened and why you are still mad at them?  Naturally, your blood pressure may begin to rise, you may even become anxious and stressed. Why deal with that? Without forgiving them, you become a slave to those emotions, until you release yourself from them. Forgiveness equals freedom.  Freedom from being bound by someone else's insecurities.  It is freedom from being bound  by their selfish behaviors and their hurt. Essentially, it is imperative that you give yourself the opportunity for your freedom from mental anguish for the rest of your life. So no matter how much of a challenge is to forgive, it's a step you have to take. Don't do it for them, do it for you!! 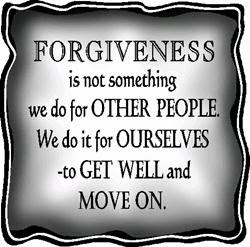 Posted by LaJule Designs at 12:09 PM No comments:

Sheryl Underwood, what were you thinking???? by Olivia Seymour

I watched the video on YouTube. At first, I didn't think her comment was offensive. After pondering on what she said, I began to feel differently. This is hair of children who are biracial, being discussed. They have a different hair texture from those who have two African American parents. Sharon Osborne asked the question, "What unusual things do we all save?" She was referring to the shows topic of Heidi Klum saving her children's hair as a keepsake. Not only did Sheryl Underwood make a bad decision in the words she chose to say, but she never answered the question that was asked.  Sheryl said, "Why would you save afro hair?", later calling it nasty.  "Why save it, you can't weave it. You don't see us going to the store and asking for it." I am going to comment on all of Sheryl's concerns...

1. Why would you save afro hair? A woman that has straight hair could possibly be fascinated with her children's hair being different from hers.
2.  Why save it, you can't weave it? My mother chose to save a Christmas tree topper I made in Kindergarten. It was what she chose to save, because it had meaning for her, just like Heidi.
3.  You don't see us going to the store and asking for it...... Uh hum..I HAVE!!!! It was an afro drawstring ponytail to be quite frank.  As a matter of fact, I have two!

So, Sheryl, we get it... you are a comedian. What makes things funny from your standpoint, usually has some truth to it or some basis of what some people may have thought at one time, but just didn't say.  But, at the end of the day, referring to afro hair as "nasty" ruffled a few feathers.  Just learn your lesson from this one my love...

Posted by LaJule Designs at 11:32 AM No comments: